Clavichords are instruments with a long history: the instrument originated from the monochord that dates from antiquity. The first mention of a clavichord dates from 1396 and the oldest still existing instrument was built in 1543. It has been a popular instrument for centuries, so popular in fact that at the time clavier was synonymous with clavichord. With the emergence of the forte piano early 19th century, especially in the form of the table piano, the clavichord disappeared from the stage. Since the beginning of the 20th century there has been renewed interest.

The mechanism of a clavichord is very simple. At the end of the key lever there is a metal plate, called a tangent, which, when the key is pressed, strikes a string that is strung above it. The string will then vibrate between the tangent and the bridge producing sound. When the key is released, the contact between the tangent and the string is lost and the vibration of the string is damped by the felt wrapped around it. The volume of the sound is limited as a result of this construction. 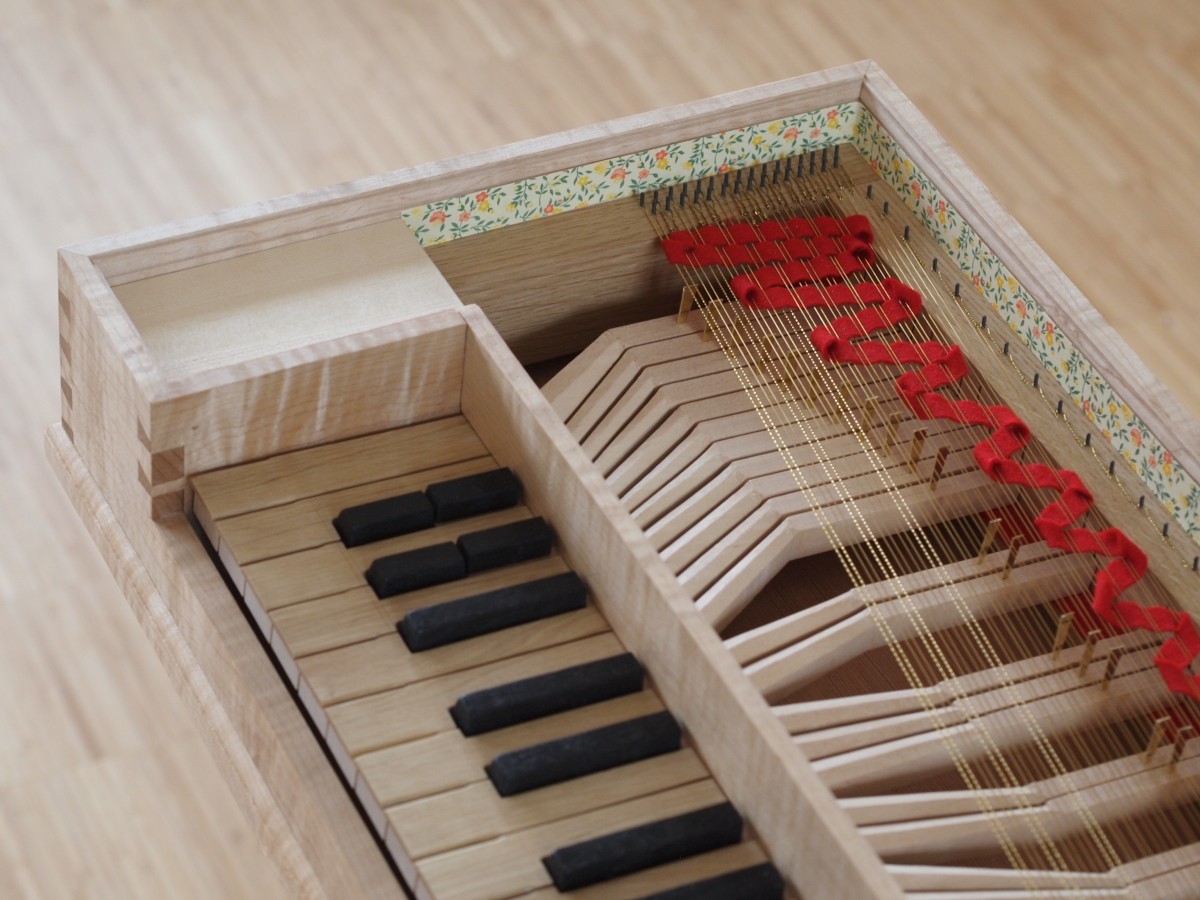 The clavichord has undergone a development over time. In the beginning when the musical requirements were still limited and material was expensive some of the strings were bound or to several keys. A single string was then played by two or even three keys, but that is not possible at the same time. This is similar to frets on a guitar, hence we call these fretted instruments. Subsequent instruments were made with individual strings per key, so these are called unfretted instruments.

Fretting an instrument has a lot of consequences for playability. When playing consecutive notes, it is very important to release the keys quickly enough because otherwise a nasty metallic sound is heard when the string rests on one tangent and the other is just below it. On the other hand, because there are far fewer strings on the instrument, the tension on the sound board is also less. And that again results in a brighter and louder sound. Furthermore, a fretted instrument has the advantage that tuning goes a lot faster, simply because you have fewer strings.

A disadvantage of fretted instruments is that the pitch and temperament are fixed. In the design of the instrument the location of the tangents is fixed and that can not be adjusted properly afterwards. Thus, for example, an instrument can only be tuned in meantone at 415 Hz, or Werkmeister III at 466 Hz, such as the Swedish clavichord that I am building. This disadvantage of course also has an advantage: you do not have to worry about it anymore.

From sources it is known that unfretted instruments were popular with composers such as Türk and CPE Bach. That is also logical, these instruments make it possible to play more complex music. It is also possible that the sound of an unfretted instrument appeals to you more, it is softer a rounder. Ultimately, it comes down to having to make a trade-off, which is the music that you prefer to play. And which sound appeals to you the most.

Clavichords are usually made with a double pair of strings per key. We call this double choired, there are also instruments with only one string per key and that is then called single choir. The advantage of a pair of strings is that the volume of the sound increases. But there is another advantage, with a well-tuned instrument, the phase difference between the two strings due to the angle at which the tangent strings touches the strings one after the other increases the sustain.

Every octave lowering should ideally result in the doubling of the string length. That succeeds pretty nice in the upper octaves, hence that curvature in the bridge. But towards the bass it becomes difficult, a brass C string should have a length of over 2.3 meters when tuned to 415 Hz (so say 62 Hz). With even lower strings, this quickly increases. This is because a string sounds best when the tension is close to the breaking point. For brass strings, a tension at 80% of the breaking is desirable for a nice sound with pure overtones.

To achieve this with shorter strings, we have to make the string heavier, which can be done by winding a thinner string around a string. The winding can be brass but also for example red copper which is even heavier. Piano strings are also often wound but in contrast to piano strings, clavichord strings are often open wounded. That is to say, you still see the core string through the winding. The space between the windings can vary and with that you can determine the correct weight of the string.

An alternative to winding is twisting. For this, a single string is folded and the two parts are then twisted around each other. This results in an even better sounding string, probably because both strings now have a spring shape and thus become more flexible so that overtones can be reproduced better. 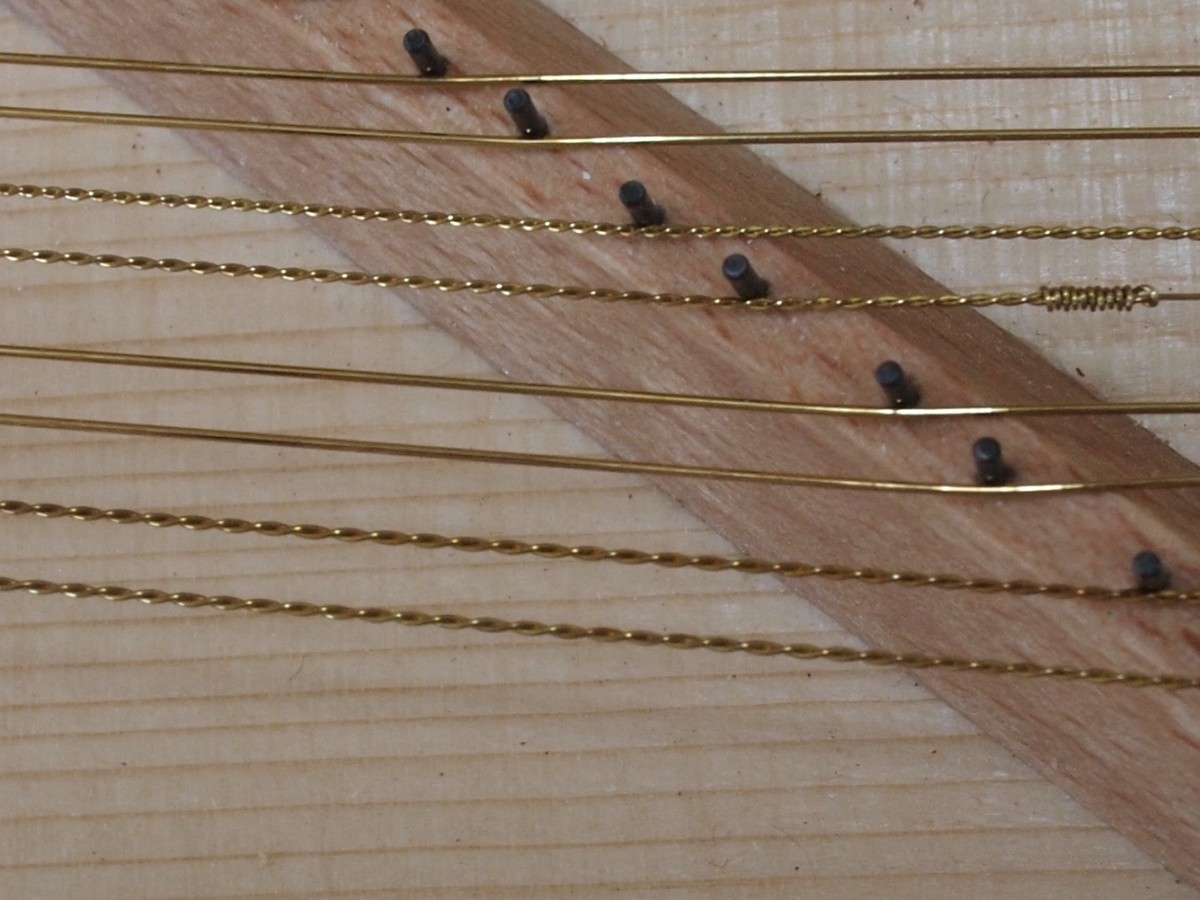 Currently I can offer two models that I have already built. A fretted and an unfretted instrument. In addition, I can of course build other instruments on request. For example, I already have a drawing for a clavichord by Friederici.

This is the most recent instrument I built. Look here for more information about this instrument.

The first clavichord I built was a copy of a Silbermann from 1775. This instrument is a very popular model, perhaps because it is not too complex and relatively easy to construct. And the sounds is very beautiful. Look here for more information on this instrument. 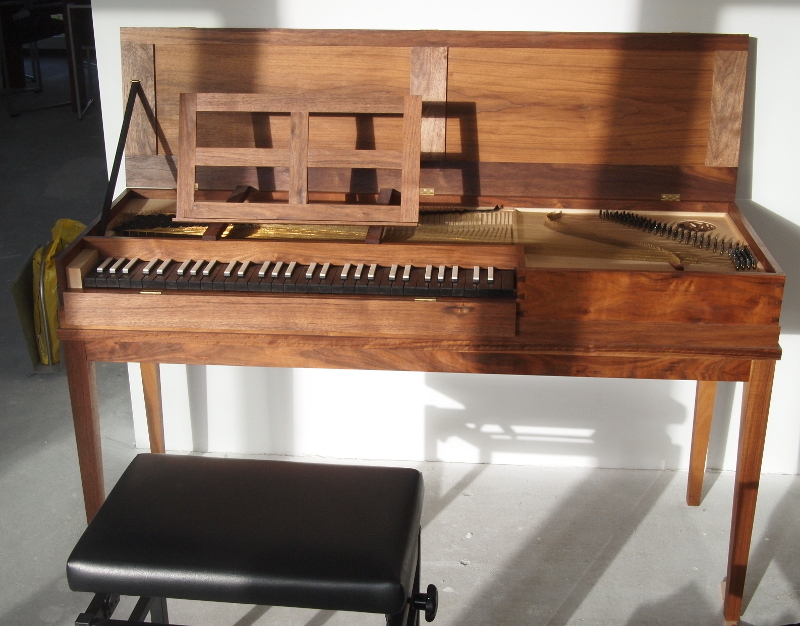